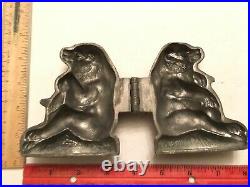 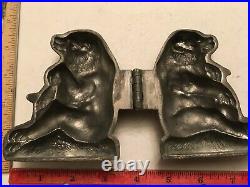 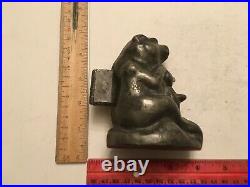 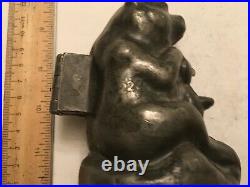 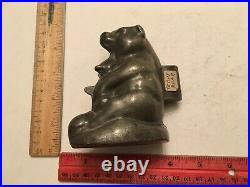 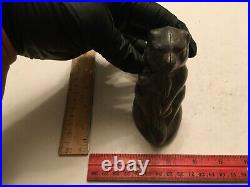 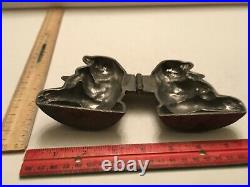 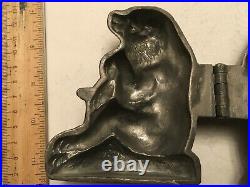 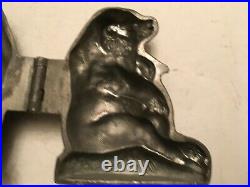 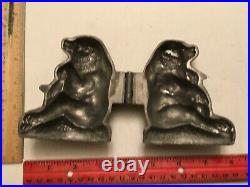 Vintage Antique Pewter Ice Cream Grizzle Bear # 222. Grizzle Bear # 222. Pewter are becoming more RARE. Hinge in great condition. Pewter in excellent condition. 4″ x 4 1/4″ x 2 1/8. Schall Company, one of the oldest American mold makers was established in 1854. They were later bought out by Krauss Co. Who removed the “S & C” from the molds. Marked their pieces E & CO, NY. But because pewter is soft and the marks often wore down due to use, sometimes they are missing or very hard to read or in the case of “S&C” they were deliberately removed. In 1897 Alfred Cralle of the United States was issued a patent on an ice cream mold. The molds were produced in a variety of shapes including animals, fruit, flowers and holiday figures and symbols. As more holidays and events were celebrated, the list grew longer. Political and romantic themes were not overlooked. George Washington’s likeness was often used. As celebrations became more commercialized, companies developed various molds to represent new themes and expanded on older ones. To keep up with the demand for ice cream molds there were a number of companies in England, France and Germany filling that need. Around the turn of the 20th century, several prominent American companies were making their own pewter molds. One was Eppelsheimer Mold Manufacturing Co. Which was located in New York City. They created molds of every theme and design imaginable, and were celebrated for their wonderful detail. Each piece displayed their signature E & Co, NY, which was stamped on one side of the mold. The catalog number was also stamped on each piece. Molds were equipped with soldered hinges. Another American enterprise made similar molds, also with the soldered hinge. Their pieces were identified with S & Co. And as with Eppelsheimer, their molds are marked with catalog numbers. Later Schall & Co. Krauss employed molded hinges, which were thought to be superior to the soldered type employed by other companies. Clad & Sons of Philadelphia was another U. Company producing ice cream molds. Ice cream molds were intended to afford individual servings. And they had a definite Victorian flavor, and were employed by restaurateurs, dairies and caterers in order to treat their patrons with a delectable dessert. Those wanting to impress guests in their homes used the molds to create distinctive confections; those creations graced the tables at dinner parties and soirees, and also were served at picnics, birthday parties, as well as on holidays and other days of celebration. As with most collectibles, condition has a definite effect on value. Because pewter is somewhat soft and malleable it is prone to suffer small dents and dings over the years. The molds might show other signs of wear, such as cracks. A common area where damage is often discovered is in the area of the hinge. Item/s have been used previously. The item may have some signs of cosmetic wear, but are fully operational and functions as intended unless otherwise stated. If there are any questions, please feel free to ask! If you need to see photo with a different angle please ask before purchasing. This item is in the category “Collectibles\Kitchen & Home\Baking Accs. & Cake Decorating\Sugarcraft & Chocolate Molds”. The seller is “jrsafety91-6″ and is located in this country: US. This item can be shipped to United States, Canada, United Kingdom, Denmark, Romania, Slovakia, Bulgaria, Czech Republic, Finland, Hungary, Latvia, Lithuania, Malta, Estonia, Australia, Greece, Portugal, Cyprus, Slovenia, Japan, China, Sweden, Korea, South, Indonesia, Taiwan, South Africa, Thailand, Belgium, France, Hong Kong, Ireland, Netherlands, Poland, Spain, Italy, Germany, Austria, Bahamas, Israel, Mexico, New Zealand, Philippines, Singapore, Switzerland, Norway, Saudi Arabia, United Arab Emirates, Qatar, Kuwait, Bahrain, Croatia, Republic of, Malaysia, Chile, Colombia, Costa Rica, Dominican Republic, Panama, Trinidad and Tobago, Guatemala, El Salvador, Honduras, Jamaica, Antigua and Barbuda, Aruba, Belize, Dominica, Grenada, Saint Kitts-Nevis, Saint Lucia, Turks and Caicos Islands, Barbados, Bangladesh, Bermuda, Brunei Darussalam, Bolivia, Egypt, French Guiana, Guernsey, Gibraltar, Guadeloupe, Iceland, Jersey, Jordan, Cambodia, Cayman Islands, Liechtenstein, Sri Lanka, Luxembourg, Monaco, Macau, Martinique, Maldives, Nicaragua, Oman, Pakistan, Paraguay, Reunion, Uruguay, Russian Federation, Montserrat, Ukraine.

Posted on February 24, 2022 by admin. This entry was posted in vintage and tagged antique, bear, cream, grizzle, pewter, vintage. Bookmark the permalink.